Thanks to the fishing and cooking traditions native to the Himakajima Island, people of Aichi have always been able to enjoy the delicious and highly esteemed seafood produce and recipes of that beautiful bit of land. Nowadays, just the phrase “It’s from Himakajima” is enough to light up the faces of any Aichi resident, who is almost always eager to try more of the isle’s tasty stuff.

Among the countless Himakajima preparations is the “Tako-Fugu”, a whole-poached octopus that it’s just a wonderful sight to behold, served together with the ostentatious course of pufferfish. Separately, those two sea creatures are already magnificent sea food dishes, but as the Aichi native’s nature mandates, a new invention was in order, and as such this absolute concoction became reality.

Those already familiar with the “fugu” will know that each meal is orderly served, starting with the deep fried soft cutlet “kara-age”, followed by the sashimi “tessa”, which is made by cutting the fish’s fillet into extremely thin and translucent slices in “usuzukuri” manner. Then there’s the hot pot chirinabe, which for the fugu is specifically called “tecchiri”, made with the more cartilaginous and bony parts of the fish, together with plenty of vegetables in a light broth. With the special addition of the octopus, the banqueter is allowed to indulge with the interspaced degustation of the lightly salted mollusk, renowned by its softness even after boiled. The fulfilling sense is incredibly rewarding!

Trying this majestic meal is a definitive must for those visiting Aichi. Make sure you do it too.

Momijiya is a traditional Japanese inn close to the Noma Kaigan Shore of Minamichita Peninsula. Here you can taste plenty of pufferfish cuisine and other seasonal seafood. 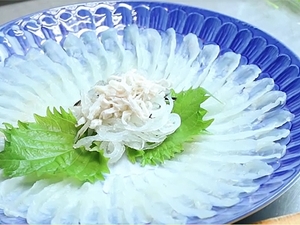 Located in Minamichita-Town on the tip of the Chita Peninsula, Hotel Hananomaru is a traditional Japanese hot spring inn where you can enjoy fresh pufferfish and seafood dishes. 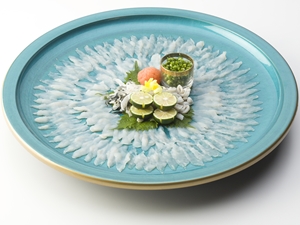