There was once a well know TV show in Japan, and its massively famous host once poked a joke at Nagoya, arguing that people here would say “Ebi-FURIYA”, instead of “Ebi-FURAI”, in mockery of the local dialect. Despite the fact that it was just a fictional gag, the rest of the country’s population seemingly got that backwards and, allegedly, everybody started to assume that the shrimp delicacy was in fact a city’s specialty. Turns out, Nagoya wasn’t particularly known for its regular, not-specially-better-than-anyone-else’s shrimp fritters.

Anyways, that is water under the bridge, but the fact remains that now Ebi-Furai is delicious in Nagoya, and the whole Japanese nation is loving it! And the multitude of serving ways is surprising, if not entertaining: shops may serve the deep fried tidbits as sandwiches, or as hot-dogs (with shrimp replacing the dog, of course!), among other rather unorthodox, but still tasty, ideas.

Besides the amusing variations, you’ll be able to find them almost everywhere, for Aichi people simply love them: they are guaranteed flavor satisfaction wherever you go. On top of a bowl of rice, with tartar sauce, as appetizer, you name it.

Just a side note: one shouldn’t be surprised, should efforts in keeping Nagoya’s Ebi-Furai always delicious be eventually found to be a veiled requital against the hapless TV host. After all, he started it!

Selling the renowned and innovative “Ebi Furai Sando”, or Deep-Fried Prawn Sandwich, a unique idea at the time of its creation, Konparu is one of the oldest cafés of Nagoya-City. Since its foundati... 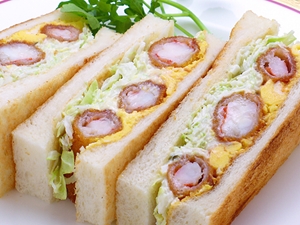 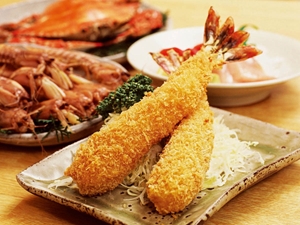