Before we start, let’s get two things straight: first, the term “dote” originally meant embankment, or dike, built in order to stop water or wind. Second, when preparing a miso soup, the common practice is to dilute the paste in a smaller container before adding to the mixture, or else it will take more effort to do it in the larger pan.

Having explained the above, let’s go to the interesting part. A long time ago some people, instead of doing the prior diluting in separate, would just apply it to the walls of the pan or pot. That would be just like building embankments, or “dote”, around the border. Then they could just go stirring the contents, slowly diluting the paste as it cooked in contact with the hot pan walls, thickening the soup all the while adding a bittersweet, roasted and poignant flavor. Add the term “ni”, for stew, and there you get it.

Well, it doesn’t explain it all. As you probably realized, Doteni could mean a stew of anything using miso broth! However, for some unfathomable reason, the habit of using pork offal (or less frequently, cattle tendon) for this particular stew, remained strong in Aichi. Some theories say that it was because of the region’s strongly-flavored miso (soybean or hatcho varieties), which better harmonizes with the exotic animal parts. Nevertheless, today Doteni is a trademark dish of Aichi, so popular that many households have their own generations-old family recipe. It goes extremely well with sake or beer, thanks to the soft sweetness of the offal and rich taste of the miso, so older people are always marveled at its sight.

Some households or shops practice turning it into “Miso-Oden”. Ingredients for the oden vary, including vegetables such as carrots, “gobo” burdock roots, “naga-negi” long onion, “konnyaku” yam cake, and others. After stewing, it may be served in a number of ways: sometimes simmered until everything turns black with the miso broth, and sometimes enjoyed with a separate miso sauce, and others. To demonstrate that you’re well-versed in the Aichi ways, finish your dinner preparing yourself the “aka-chazuke”, done by pouring the remaining (and delicious) soup into a bowl of rice. Top it with the boiled egg halves and wait for the compliments in admiration!

This standing bar, much-loved for over half a century, is located near Meitetsu Horita station. Their doteyaki (beef sinew stewed in miso and mirin) is soft and springy. It is made with offal fresh... 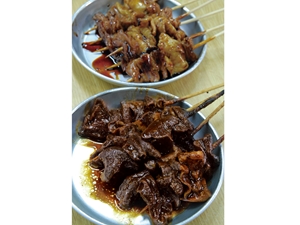 This popular izakaya by the entrance to the Endoji shopping arcade is always lively with regular customers. The doteyaki blends several types of miso, including hatcho miso, and appropriately stews... 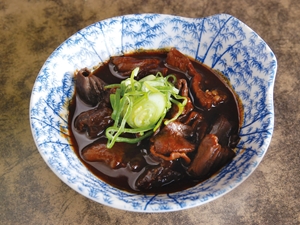 This is a long-established restaurant that began as a stand right after the war. The dote, which combines the sweetness and spiciness of hatcho miso, is a blackish brown, but is surprisingly mild. ... 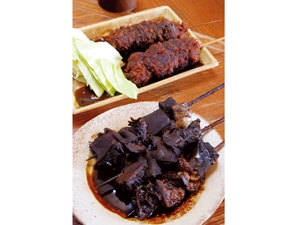